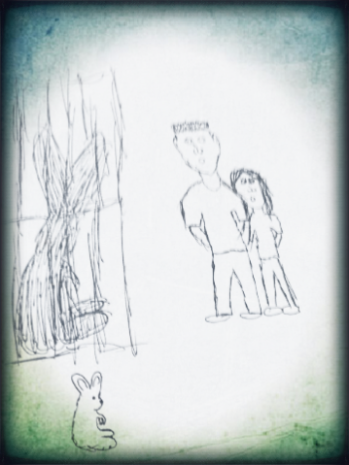 Writing and artwork by My own amazing 11 year old son Bridger:  (his first blog, no edit)

The kids they all gathered in the corner afraid of what it might be as it drew nearer, a big shadow was cast over 15 of the lockers

Tim hugged Gracie and said if we don’t live I want you to know I love you.

Gracie laughed and said, me too, as she hugged him back.

The monster drew nearer until he came around the corner.

It hopped next to Tim.

It was just a rabbit.

They all laughed at Tim, and even Gracie.

With a shake, Tim’s mom was standing over him and saying, “get up, it’s time to get ready for school.”

Tim got up, got ready and went to the car to go to school.

As he was getting in the car he said, “boy am I glad that was just a dream” as he looked in the rearview mirror watching his little brother wave goodbye.